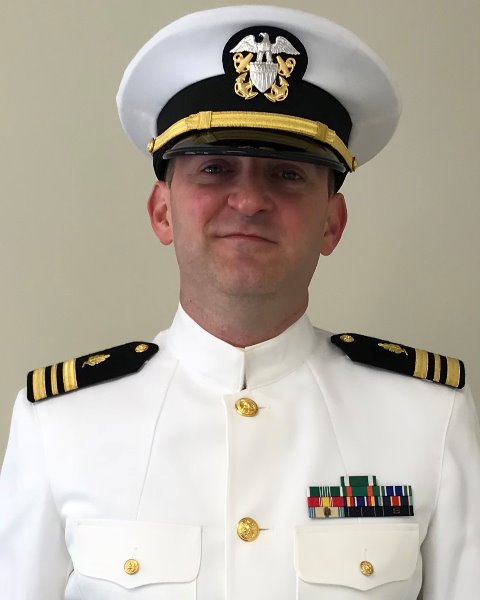 LCDR Ronnie Scott Holuby received his Bachelor’s degree in 1998 from Southwestern Oklahoma State University and a Doctor of Pharmacy degree from Campbell University in 2013.
He began his pharmacy career in 1998 and was commissioned in the Navy Reserve in 2011. Since then his assignments have included Operational Health Support Unit (OHSU) Camp Pendleton; Expeditionary Medical Facility (EMF) Camp Pendleton; OHSU Pensacola; EMF Bethesda. He has served as officer in charge, training officer, administrative officer, and health promotions officer.
In 2013, he was mobilized to Landstuhl Regional Medical Center as part of Navy Expeditionary Medical Unit (NEMU) 14 in support of Operation Enduring Freedom. He served as an Inpatient Pharmacist and as the Formulary Manager for the European Regional Medical Command. In 2017, he was recalled to active duty and assigned as Operational Support Officer for Navy Reserve EMFs with the Bureau of Medicine and Surgery, Falls Church, VA. In 2020, he served as the Chief of Pharmacy, Javits Medical Station Pharmacy with EMF Bethesda in support of COVID19 relief efforts.
His personal decorations include the Navy and Marine Corps Commendation Medal, Army Commendation Medal, Navy and Marine Corps Achievement Medal, Army Achievement Medal, and various campaign and service medals.
In civilian practice, LCDR Holuby is a Health Informatics Clinical Pharmacist with the Defense Health Agency in San Antonio, TX. He has been certified by the Board of Pharmacy Specialties as a Pharmacotherapy Specialist since 2007 and by the American Association of Diabetes Educators as an Advanced Diabetes Manager since 2008.