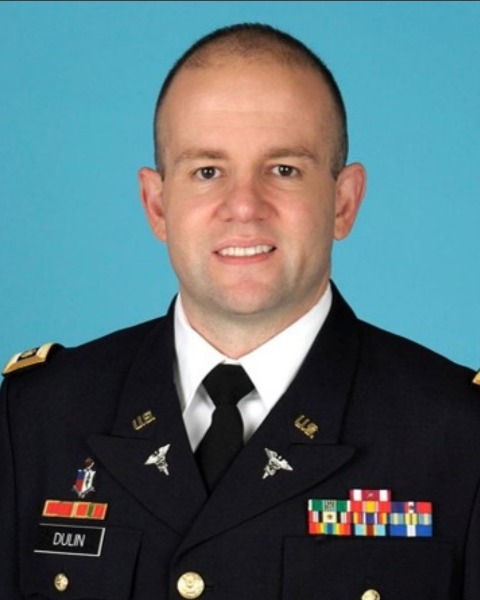 MAJ P. Race Dulin, Pharm.D., MBA, BCPS, began his career in the U.S. Army upon graduating from the School of Pharmacy in 2007. Over the past 13 years, he has served in a variety of roles as a pharmacy officer to include administrative, inpatient, outpatient, clinical, medical logistics, and on the battlefield. He is currently assigned as the Chief of Pharmacy & Lab Division at the United States Army Medical Materiel Center – Europe (USAMMCE) in Germany. In this role, he oversees the annual procurement and distribution of pharmaceuticals, laboratory items, and over 200,000 influenza vaccines for all military personnel and dependents across Europe, Africa, and the Middle East. Additionally, he was nominated to serve as the U.S. delegate to the NATO – Military Medical Materiel and Pharmacy Panel in 2018. The purpose of the panel is to develop multinational policies aimed at increasing interoperability between NATO allies and to make voting recommendations for senior U.S. delegates.

His preferred area of focus is closing the gap between the battlefield and the fixed hospital environments. Commonly referred to as “Medical Planning” involves analyzing a potential environment and addressing gaps in medical care. When troops are operating in remote areas and under intense physical and mental stress, even mild conditions can rapidly deteriorate putting both the service member and the mission in danger.

His professional credentials include earning his Masters of Business Administration, Pharmacy Practice Residency (PGY-1) at Walter Reed National Military Medical Center, Board Certified Pharmacotherapy Specialist and is a graduate of the U.S. Army Command and General Staff College. He has received numerous military awards and is a veteran of the conflicts in Iraq and Kosovo.