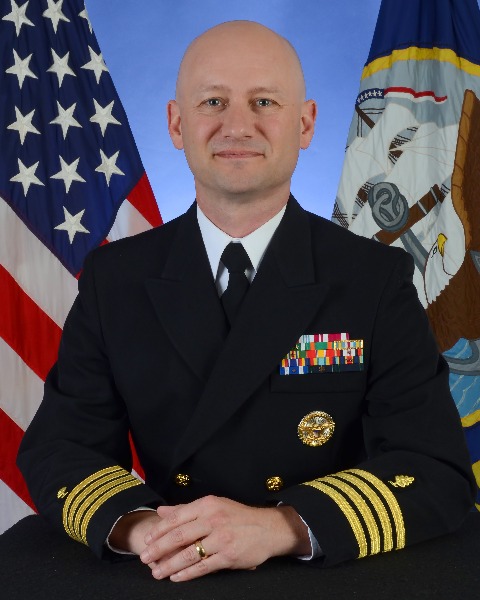 Captain Hardin is a native of Southaven, Mississippi, and was commissioned as a Lieutenant in the summer of 1999 through the Navy Health Science Collegiate Program. He graduated from the University of Mississippi with a Bachelor of Science Degree in Pharmaceutical Sciences in 1997, and a Doctor of Pharmacy Degree in 1999.

His first station was at Naval Medical Center, Portsmouth, Virginia, where he was exposed to a breadth of clinical and leadership experiences in pharmacy and the Navy. His second tour was at Branch Medical Clinic, Meridian, Mississippi, as the sole pharmacist and he oversaw laboratory and radiology services. In 2005, he transferred to Naval Health Clinic, Charleston, South Carolina, honing his pharmacy leadership skills at a much bigger and busier pharmacy. His next duty was to Afghanistan for one year supporting Operation Enduring Freedom as a pharmacist mentor on an embedded training team at the Afghan National Army’s largest military hospital located in Kabul. Following this deployment, he completed an overseas tour serving as the Department Head, Pharmacy at U.S. Naval Hospital, Sigonella, Italy. He also gained a deep insight into Navy Medicine while serving as the Command Evaluator and MEDIG Liaison.

In 2012, he transferred to Fort Detrick, Maryland and served as Chief, Pharmacy Programs, at the Defense Health Agency, Medical Logistics Division. During this tour he managed the DoD/FDA Shelf-Life Extension Program, the Joint Deployment Formulary, and the DoD Pandemic Influenza Stockpile Program. His next assignment was to serve as Department Head of Pharmacy at Naval Hospital Jacksonville, Florida, the third busiest hospital in the Navy. Since June 2018 he has been serving as the Pharmacy Consultant and Specialty Leader at the Navy Bureau of Medicine and Surgery (BUMED), and most recently served as the Deputy Assistant Deputy Chief for Medical Operations (M3).