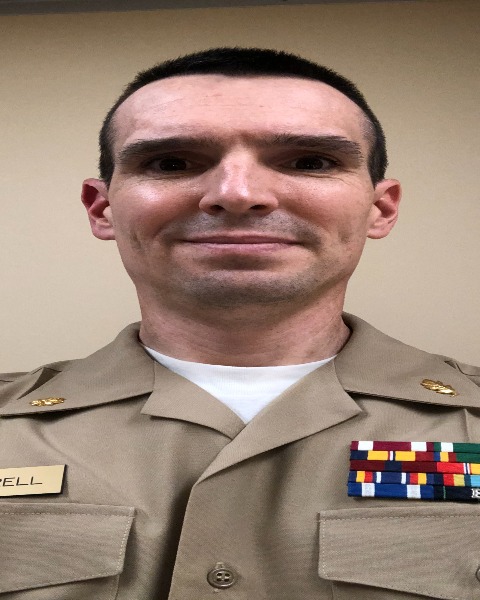 LCDR Romrell is a native of Corvallis, Oregon. He enlisted in the Marine Corps in September 1999 and served in the infantry, obtaining the rank of Corporal, until completing his enlistment in 2003. While serving, he acted as part of the response force after 9/11 and was one of the first 500 ground troops into Afghanistan. After completing his enlistment, LCDR Romrell immediately enrolled in college and started his pre-pharmacy requirements. He graduated Cum Laude from Oregon State University with a Bachelors of General Science and was accepted into the pharmacy program. In 2011, he graduated from the OSU College of Pharmacy with a Doctorate of Pharmacy and was commissioned into the Navy Medical Service Corps via the Naval Health Services Collegiate Program.

LCDR Romrell began his Naval carrer at Naval Hospital Bremerton, serving as the Inpatient Division Officer. In 2013, LCDR Romrell returned to Afghanistan working in the NATO Role 3 Multinational Medical Unit in Kandahar. Upon returning from Afghanistan, LCDR Romrell served as the Assistant Department Head working on a pharmacy renovation project. LCDR Romrell transferred to the Naval Health Clinic Quantico as the pharmacy department head August 2014. While at NHCQ, he attended Lean Six Sigma training and became heavily involved in the development of RxMAP. In 2015, he was accepted onto the Navy Pharmacy Advisory Board and was recognized as Navy's Junior Pharmacist of the Year. LCDR Romrell transferred to Fort Belvoir in 2017 where he has worked as the OIC in all three major pharmacy divisions. He currently serves as the Assistant Chief of Pharmacy and the Chair of the DHA Pharmacy MTF Advisory Board on Queuing, Patient Communications and Analytics. He is the proud father of six amazing children.