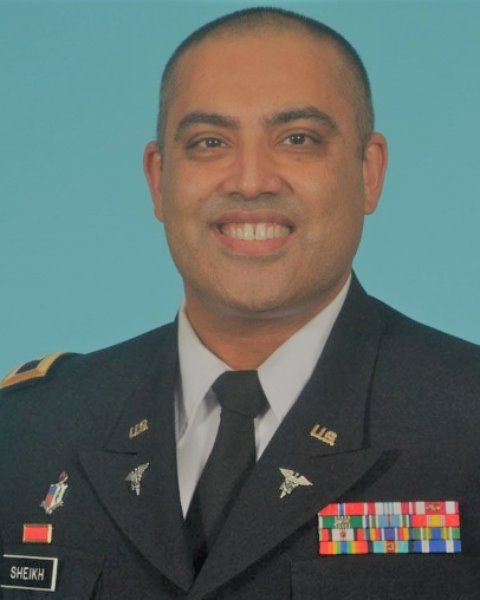 COL Aatif M. Sheikh, PharmD, MHA, MBA, MSS is the Director, Army Pharmacy Service Line, OTSG. His first assignment was at Walter Reed Army Medical Center as the Chief, Outpatient Pharmacy. He then completed a Pharmacy Practice Residency at WRAMC. His next duty assignment was at Soto Cano Airbase as the Chief, Ancillary Services. Upon returning to WRAMC, he served as the Chief, Pharmacy Informatics. His next assignment was the Chief, Pharmacy, Kimbrough Ambulatory Care Center. He then PCSed to serve as the Support Operations Officer for the 16th Medical Logistics Battalion.
After completing an MHA and an MBA from Baylor University, he served as the Chief, Pharmacy Division for General Leonardwood Army Community Hospital.
His next assignment was the RAND Fellowship in Santa Monica, California. COL Sheikh then returned to WRAMC as the Assistant Chief, Department of Pharmacy to execute the merger and establishment of Walter Reed National Military Medical Center (WRNMMC). After approximately a year, he deployed to Afghanistan as the Theater Pharmacy Consultant.
While deployed, COL Sheikh was selected as the Deputy Director for Administration at WRNMMC. For his next assignment, COL Sheikh served as the chief of Pharmacy, Evans Army Community Hospital, until he was selected as the Deputy Commander for Patient Services. After two years, COL Sheikh PCSed to Hawaii where he served as the Deputy Commander, Patient Services, Tripler Army Medical Center. In September 2020, he was appointed as the Pharmacy Consultant (67E) to the US Army Surgeon General.
A graduate of the Army War College, his awards include the Bronze Star Medal, Defense Meritorious Service Medal, Meritorious Service Medal (3 OLC), Army Commendation Medal (7 OLCs), and the Joint Service Achievement Medal. He was awarded the “9A” proficiency designator and is a member of the Order of Military Medical Merit.